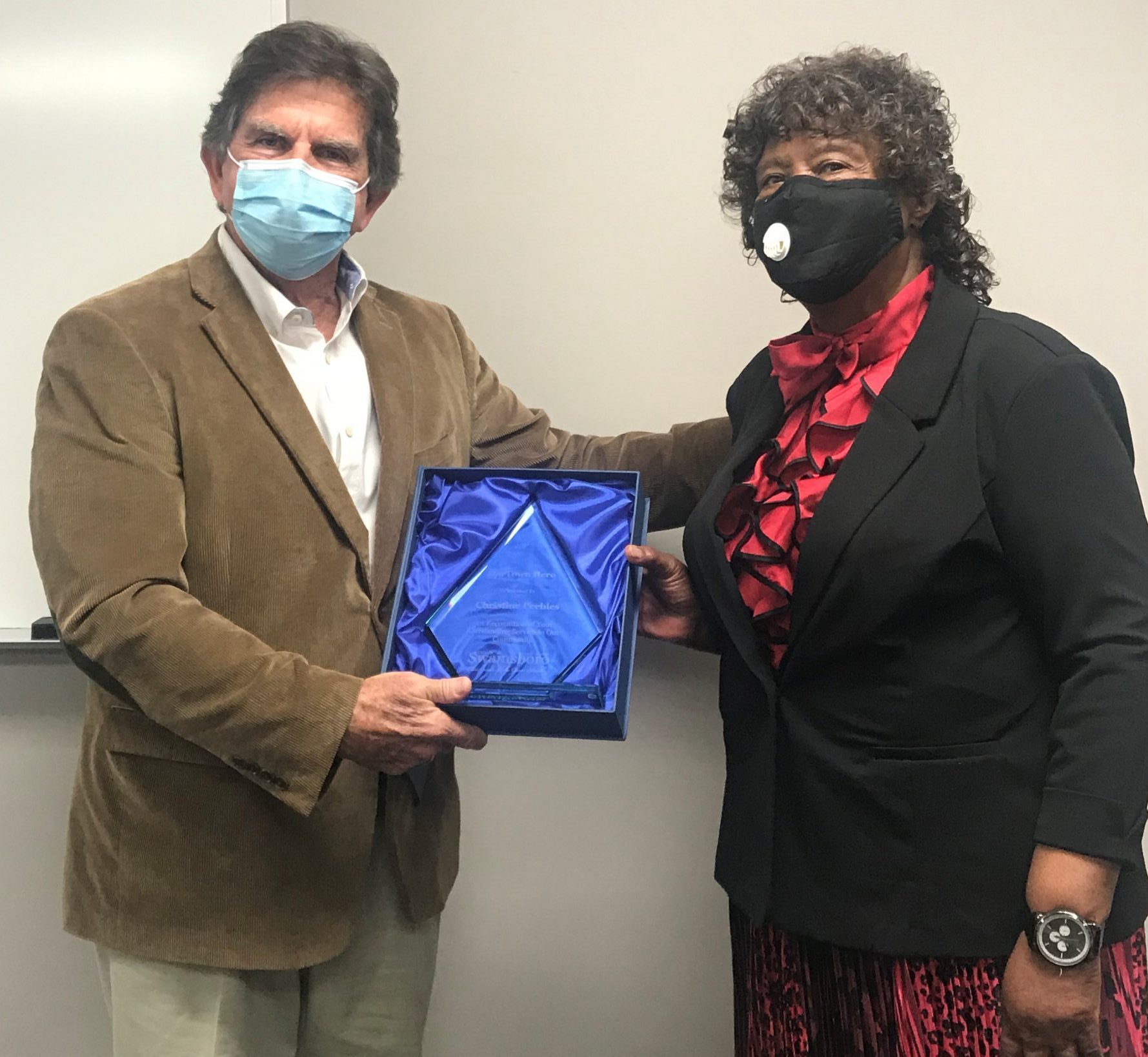 A crowd gathered at the Swainsboro Fire Headquarters last Monday evening in support of Pastor Christine Peebles as she was presented with the OurTown Hero Award by Swainsboro Mayor Charles Schwabe.

A resident of Swainsboro since she was just 5 years old, Pastor Peebles was raised by her grandmother and grandfather, who was a Baptist minister.

“I feel that God put me in Swainsboro at the age of 5 for this time we are living in now,” Peebles said.

Peebles has worked to build what she considers a ministry of helping people.

“I have a love of people and reach out anywhere and anytime I see need,” she said.

One of the ways she has fulfilled her mission of helping people is through her coordination of two community food giveaways in partnership with Crider Foods. As told by Steve Jarrard, Crider Foods Plant Manager, and Peebles’ son Titus, Crider Foods President, Billy Crider, donated 40,000 pounds of chicken to be distributed within the community last May.

Jarrard enlisted Pastor Peebles to organize distribution, which she accomplished by coordinating the involvement of 98 churches from the community. After the success of the May event, Crider Foods partnered with Peebles again in November for a second giveaway. This time she purchased additional items, such as paper products, cooking oils, soap, and other home necessities to be distributed along with the chicken.

In addition to serving the local community, Peebles’ impact has reached far beyond Swainsboro and Emanuel County. From her support of numerous individuals and families through illness and turmoil, to providing necessities for others, to sharing her message around the world through her four published books, Pastor Peebles has touched the lives of many.

In accepting the OurTown Hero Award, Peebles noted the importance of helping those in need by reciting Matthew 25:35-40.

The City of Swainsboro’s OurTown Hero Award is presented those who have made a positive impact on the Swainsboro community. Nomination forms for the OurTown Hero award are available at Swainsboro City Hall and online at www.cityofswainsboro.org. 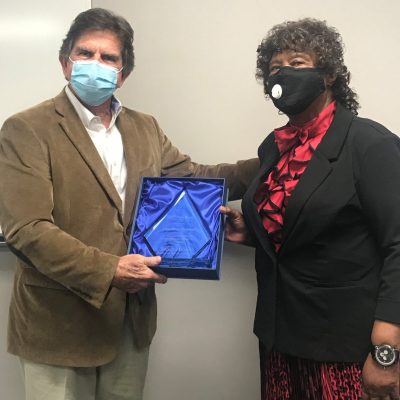 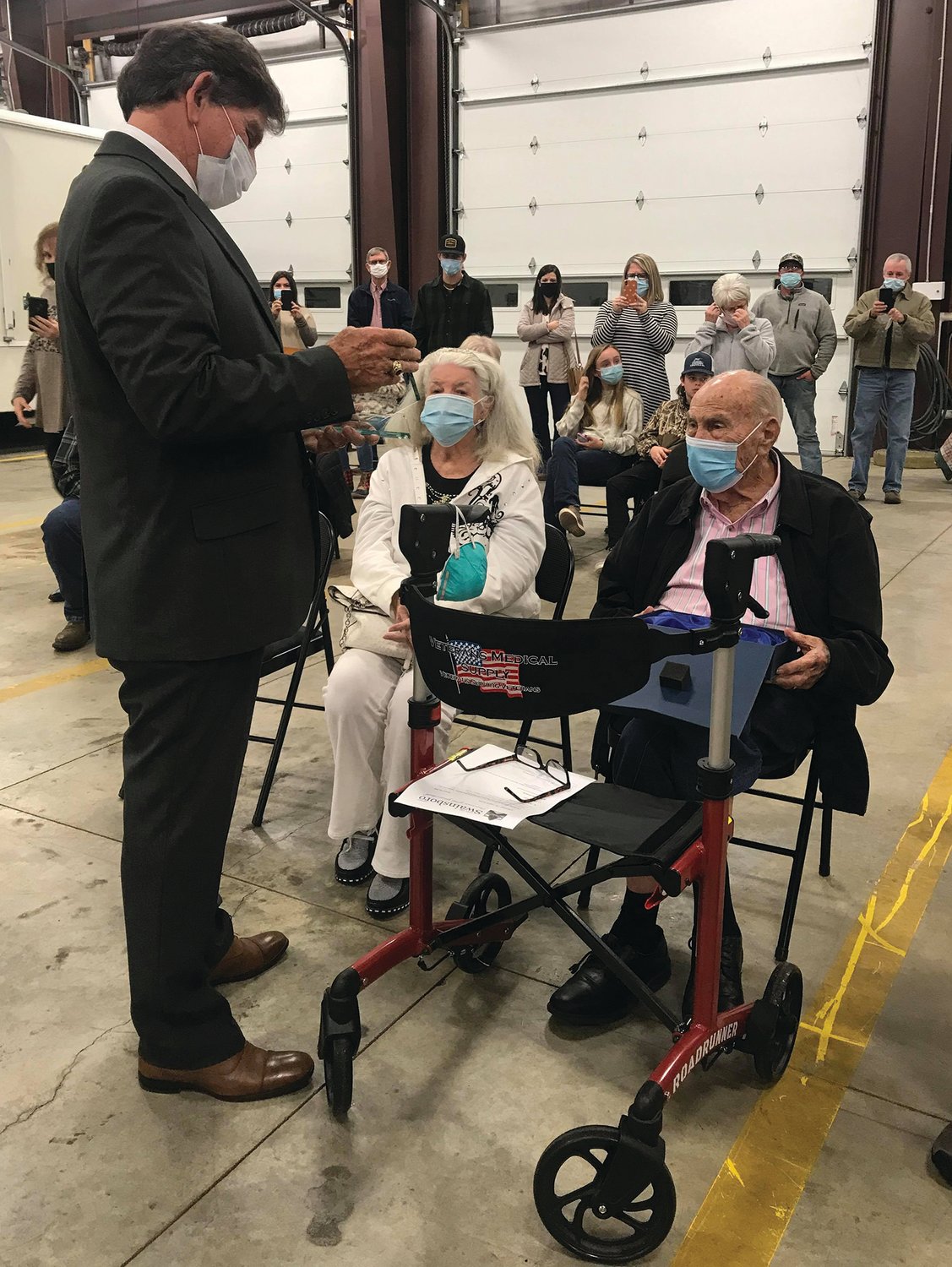 Mr. Perry Raymond Riner was born February 1, 1930 to Perry and Irene Claxton Riner. He graduated from Swainsboro High School in 1948. He has been a member of Swainsboro Primitive Baptist Church, known as United Primitive Baptist Church, from 1942 to date. In 1948, Raymond married Johnnie Clyde Curl and, together, they had two sons, Larry and Donny Riner. A member of the Georgia National Guard, he served in Korean Conflict. Raymond attended LSU Banking school for three years and worked at Central Bank for 12 years. He also worked at Perry’s Open Air Market and Perry’s Auto Auction with his father, becoming owner of the auction in 1962. In 1963, the Dixie Youth Baseball Complex named one field in his honor. Raymond served on the Emanuel County City Council for three years. He married Ava Hartmeyer in 1973, adding to the family her children, Steven, Derek, Shea, and Stormy Hartmeyer.

I’ve known Raymond Riner all my life. Our families have had close relationships for several generations.

I know Raymond has touched the lives of countless alcoholics and other substance addicts and their families for the last 40 plus years. He always knew that alcoholism and drug addiction are family diseases.

The word “no” was not in Raymond’s vocabulary, along with others, he helped to get state funding of a medically supervised detox center on Anderson Drive, establishing a place for suffering alcoholic, addict and his or her family.

Raymond served on the Board of Directors of the Bridges of Hope in the early days of its infancy. Alcoholics and addicts could stay in their recovery program as “long as it took” and their families could pay for if they could. Many had no means to pay anything. Now, there are 6 or 7 Bridges of Hope throughout the state.

Family members would come to Raymond at their wit’s end for advice on how they could keep their loved ones from dying from the disease of addiction. He would always listen and then, if possible, help them.

Over the years, thousands of people have benefitted from Raymond’s life of service. Many times his help would be financial. He followed where God led him.

Most recently, Raymond and a group of local people bought 4 houses and began what is called “Crossroads-Swainsboro.” One has been dedicated for females and the others for men. These are half-way houses for men and women to live in and, eventually, find work and get back on their feet. The only requirement is to continue in their recovery program and to have some structure in their lives and when they can, pay their way.

One could go on and on about Raymond’s life of service to recovery and to our community that he loves so dearly! People have heard him say: ‘Don’t praise me for those who are successful but don’t blame me for those who failed, this time, because the next time we try to help them, they may succeed. Never give up.’